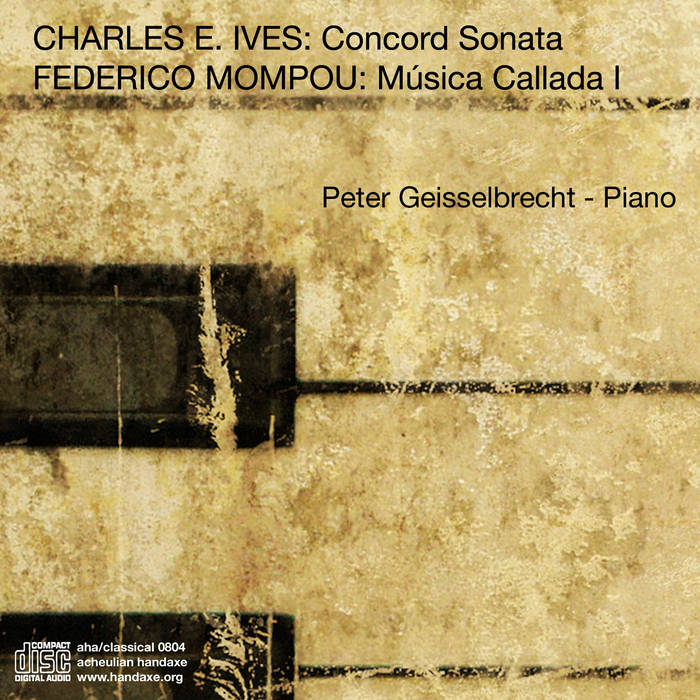 Peter Geisselbrecht, born 1954, studied music in Cologne (piano, com- position, improvisation) under Klaus Oldemeyer, Joachim Blume, Vinko Globokar and Klaus Runze. He specializes in 20th century piano music, and as an improviser he works primarily with musicians who are equally versed in free improvisation, jazz and contemporary classical music. Since 1985 he teaches piano and improvisation at Giessen University.

The title of Federico Mompou's piano work Música Callada refers to the Cántico Espiritual, by poet San Juan de la Cruz. In this poem - La Música Callada, la Soledad Sonora - de la Cruz describes a music, that is the voice of the silence itself, while the solitude itself becomes music.

Charles Ives' Concord Sonata portrays individuals who are associated with transcendentalism, a 19th century movement that concerned itself with the inner spiritual essence of the human. Ives wrote about Thoreau, who lived in reclusion, that "he was divinely conscious of the enthusiasm of nature, the emotion of her rhythms, and the harmony of her solitude."

This image of nature of the hermit Thoreau as seen by Ives, and San Juan de la Cruz's idea of the silent music / resonant solitude. Maybe we can see this as a point of reference between these works by otherwise very different composers.

German pianist Peter Geisselbrecht presents a double bill that brings together two very different composers on the count of their interest in solitude: the Transcendentalists for Ives, mystical poet San Juan de la Cruz for Mompou. The program consists of Ives’s “Concord Sonata” (1947 version), and Federico Mompou’s “Música Callada I.” The first piece, complex and vivid yet so finely structured, is in sharp contrast with the angelic calm of the second one (four of its nine movements are marked “lento,” with another one marked “placid”). The “Thoreau” movement of the Concord is sublimely performed. Geisselbrecht’s playing is elegant, and his choice of works proves to be well thought.

These tricky and layered lines of musical thought seem to me to emulate the brain-patterns of Ives’s chosen subjects, the all-American philosopher-literary figures Emerson, Hawthorne and Thoreau who did so much to shape the interior and exterior landscapes of New England. I particularly like the solemnity and gravity with which Geisselbrecht limns the darkened, pondering countenance of Thoreau, an approach which may be worth comparing with the numerous takes that John Cage had on the same subject.

Something entirely different here. Pianist Peter Geisselbrecht tackles scores from the repertoire of a pair of composers from the last century who apparently don’t have so much in common. However a link exists between the two, under the guise of the diverse types of spirituality to which both allude (respectively, associations to transcendentalism and Thoreau, and the influence of mystic poet San Juan De La Cruz). The underlying aura should not divert our concentration from the severe beauty of the resulting music, interpreted by Geisselbrecht with exactness and sentiment. At times Concord Sonata might result slightly problematical for the not conversant, its four parts mixing ponderous chordal superimposition and unselfish reflection in a succession of intense movements, (rare) ironic touches and grieving passages. It’s a demonstration of the viewpoint according to which solemnity and a sharp mind can live together after all and, ultimately, it is splendid stuff. Mompou is the one to choose for the most melancholic in the audience: the nine chapters of Música Callada are rather undersized and explicatively titled (“Lento”, “Afflitto e Penoso”, “Semplice” to quote but three). They continue what the more placidly thoughtful sections of Ives’ work had begun, establishing a typical impression of quiet sadness connected with classic “look-at-a-distant-past” atmospheres, with just minor deviations from this canon. We almost smell the dust of the large rooms in ancient mansions while mentally envisioning interminable silences, meaningful studies and timorous approaches to an equally shy counterpart. Objects of a reciprocal love that will never be confessed.

It's ages I don't review a contemporary classic piano work like these and every once in a while I'm so glad to deal with such materials above all if the matter is interesting and this is the case. While I had never heard before Mampou, the composer Charles Ives is not exactly new to my ears, his Concord Sonata presents an interesting mix of melodic passage and soft breaks but don't expect it to be something barely close to late Nineteenth century composer like Cage or even Webern. Ives composition reminded me a bit of the half of the works surely influenced by serialism and this need for abstraction of academics but at the same time he's managed to keep a melodic edge. Geisselbrecht interprets wonderfully the four episodes and for what I can understand his technical skill gets really congenial to the fast passages written by the American composer. As I've said I didn't know anything about Federico Mampou, this recording collects nine short compositions that go from one to three minutes, during the first listening the melodic parts really reminded of Satie but later I started thinking something could have been comparable to some piano works for children of Bartok. Both of the comparison could also be quite misleading, thus let's say that this melodic idea of simple piano compositions is meant in a personal way, infact Mampou aesthetic-al taste is less light hearted. If you listen carefully to all of the sketches here included I'm sure you'll notice there's something mysterious rearing its enigmatic head exactly when you don't expect it to arrive in some of the scores. Mampou's style is based on less notes and and a more slowed down attitude and Geisselbrecht has no problem to put himself in this kind of shoes. Some music makes me think are more eternal than others.