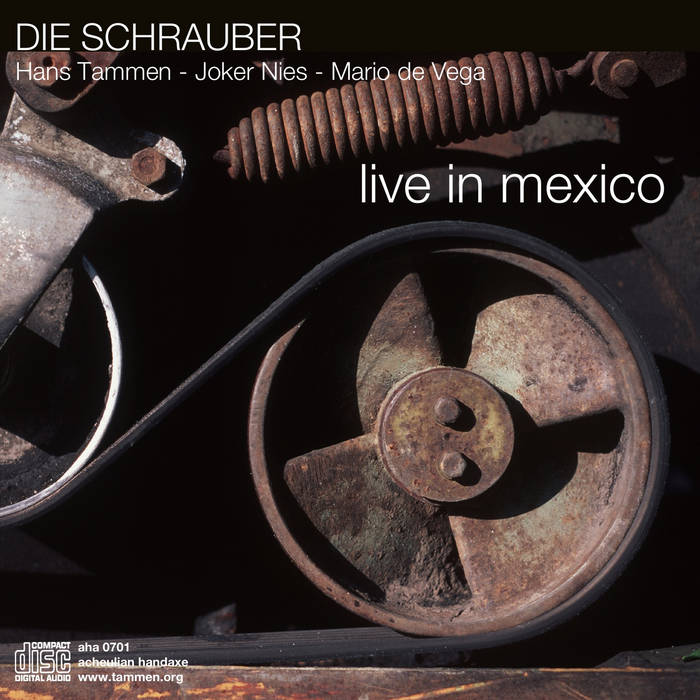 Joker Nies (Cologne) modifies or builds his instruments to his needs. Apart from other techniques, he acts as a connector of circuits not intentionally related. He touches and combines the circuitry of the instruments through skin-resistence, creating spontaneous and delicate music with subtle control.

Hans Tammen (New York) works with a wide collection of mechanical devices on his "endangered" guitars, and uses an interactive software of his own design to rework his sounds in realtime. His music has been described as a journey through the land of unending sonic operations, his playing as reverse engineering of the guitar.

Massimo Ricci - "Record Of The Week" in Bagatellen.com:

Here’s an appropriate paradigm of amazingly dynamic EAI that wins any title fight against the bastard sons of onkyo. By now Hans Tammen’s “endangered guitar” has probably arrived in close proximity of the ultimate frontier which an axe can be pushed to in terms of erratic sonority, something that perhaps not even messieurs Frith, Reichel and Fitzgerald could envisage at the time of their pioneering experiments on the Guitar Solos series.

In Tammen’s visualization, paradoxical chords and warping-as-they-resonate phrases repelling any classification get additionally butchered by the innards of an unspeakable tabletop apparatus. Cologne’s Joker Nies uses bare hands to hook up “circuits not intentionally related”, his skin the intermediation between the various gradations of an extraordinary palette of hums, pops, whirrs, clicks and selected effervescent malpractices. Here’s to hoping that the man is sufficiently strung-up to steer clear of electric shocks (wasn’t that song called “I got the music in me”?). Mexican Mario De Vega is the third factor in this stimulating equation as the inventor of SPK©, a software used to control the course of action of real-time sample processing together with other external devices and “body bending”, for what that means. Dadaist abstractness, leftovers from the commentary of a soccer match and outlandish modifications of common sense are all embraced by what De Vega accomplishes in this set.

The four tracks of Live In Mexico - especially the 32-minute and longest “Die Schrauber” - constitute one of the brightest examples of truly original improvisation that I’ve heard this year (with culpable delay, as the CD was released in 2007). Too problematical for an in-detail illustration, the events succeeding at breakneck velocity, this a record chock full of exhilarating twist and turns - sounding spectacularly dirt-free for a change - needing to be rescued from an oblivion that would be as unjust as the kudos given to cult-instigating nonentities in rigorous in guru stance cuddling (or just watching) a silent instrument, most likely thinking about the adequacy of their fee in the meantime.

Die Schrauber is an improvising trio comprising Hans Tammen (endangered guitar and live sound processing), Joker Nies (omnichord, circuit bending instruments) and Mario DeVega (glitch sampling and his own software SPK). This hour-long CD, recorded in December 2005 at the Transitio_MX Festival, contains the full 30-minute trio set as well as excerpts from the respective musician's solo sets. Nies and DeVega might not be as well knows as Tammen, but they quickly establish their credentials here as fiercely intrepid improvisers right off the bat.

Indeed, the intensity of interplay and energy here is relentless and rewarding. All three engage in real time signal processing and circuit bending, whether through skin-resistance contacts in the case of Nies, DeVega's Teleo-based proximity sensors and Tammen's trademark "Endangered Guitar" which is prepared with mechanical devices that allow the sound to be re-worked and processed in real time.

They exploit their remarkable control and on-the-fly flexibility on this caffeinated exchange of pointillist fractals, oscillations, whirrs, drones, whizzes, buzzes, slurps, farts, whoops, pops and clacks that bombard and scorch the ears with a heat-seeking intensity.

While it is difficult to tell who does what on the group piece, the solo pieces help clarify matters somewhat. Nies' solo consists of old-school oscillations, groans and bass tones, while Tammen's unaccompanied contribution emphasizes extreme guitar processing, string stretching, bending, and tapping. DeVega's work leans more towards microtonal scratches, pips, squeaks, and needlesharp noise clusters. While each of these volatile solo sets is an impressive showcase, they miss the kinetic feverishness of the group interplay that makes this one of the best discs I've heard all year.

Distorted wave-form circuitry, glitch sampling and unusual alterations in guitar manipulation and construction are on show in this notable electro-acoustic outing. All together the techniques of Köln’s Joker Nies, using a circuit-bending Omnichord; Mexico City’s Mario de Vega’s real-time, self-designed software samplers with external data-control devices; and New York’s Hans Tammen enlarging the sounds from his table-top “endangered guitar” with live sound processing; evolve at such a frantic pace that the result demands dedicated listening to isolate different sonic impulses.

With flanged reverb and distorted drones and vibrations from the guitar as the most identifiable tone, the program also encompasses samples of rhythmic footfalls plus the sounds of Spanish-speaking voices stretched, hiccupped, run backwards and quickened. These pulsations intersect with modified and capricious layers of machine-driven protracted corkscrew buzzes, watery whooshes and babbling, as well as patched other-directed unvarying loops of oscillated crinkles and crackles.

By the time the frequently interrupted and modulated echoes, processes and samples reach staccato and fortissimo density then loop back upon themselves for timbral connection to their first instigation, a stand-alone sound world is created. Remaining immersed in it until the concluding reverberations is the listeners’ preferred option.

Although your writer is a wholehearted practitioner of the acoustic, and often disappointed by many electronic productions, what I heard in this concert recording from December 2005 in Mexico City makes me take my courage and report my deep satisfaction. Certainly I wouldn’t listen to this CD every day. But for nothing else in this world would I miss a concert of Die Schrauber: with Hans Tammen (New York) – endangered guitar & live sound processing / Joker Nies (Cologne) – omnichord & circuitbend instruments / Mario de Vega (Mexico City) – SPK & glitch sampling. The CD was published in 2006 on Hans Tammen's record label Acheulian Handaxe.

A long trio improvisation in thirty two minutes during which the music evolves in a subtle and contrasted way, but with relative complex and rather striking variety of soundscapes. They interact smartly, with great dynamics in the sound. Although the three personalities distinguish themselves from each other easily, a true coherence comes out in the frictions and exchanges. To find out who does what is a true puzzle. Around the 25th minute, the guitar takes off and the trio gets carried away two/three minutes, until a calm moment emerges when the initial ambiance gets further embellished by voices samples. The acute sense of contrast at different levels is the main asset of the trio, and this is remarkable for each of its members and their collective excellence. Those thirty-two minutes are captivating from the beginning to the end. This is a fascinating ensemble, and it is very playful.

The three following pieces, each a solo of approximately ten minutes, gives us the opportunity to discover the personality of the three musicians. Only Joker Nies seems to follow the idea of the trio: one doesn’t leave the universe of the music of Die Schrauber. At the end of his track we hear various utterances, and an appreciable logic. Hans Tammen is a tabletop guitarist, one of the most fascinating and remarkable. During his performance, he chooses to play with space and pauses, keeping an eye on sustain. After a contrapuntal tangle, the fifth minute evolves towards a nice atmosphere and interesting ideas; we guess now that this is a guitar. Tammen masters the sound in an exemplary way: a true coherence. Mario de Vega is without hesitation the leaping elf of the trio. His solo ends the concert with a nice juxtaposition of rhythms and ostinatos that extend the previous tracks wonderfully.

An excellent band, heard and appreciated by my colleagues from the magazine at the Total Meeting from Petit Faucheux. Bravo!

Mike Wood - Foxy Digitalis
Die Schrauber is that rare trio of improvisers who have widely disparate means for creating sound, but who exuberantly, willingly, blend their experiments into a majestic and enjoyable whole.