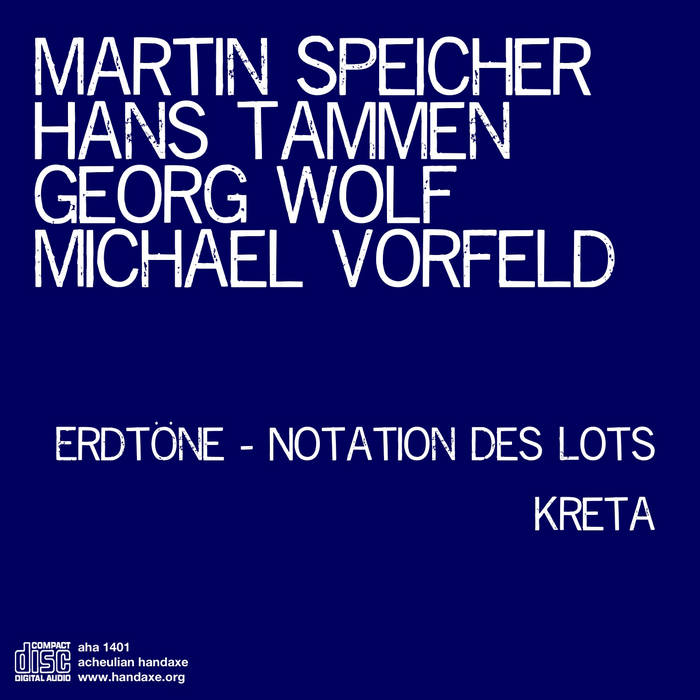 Composed by Martin Speicher (Kassel/Germany), inspired by paintings created by sculpturist and painter Haral Jegodziensky. The paintings used for Notation des Lots were made in Kreta, the famous island of Greece. Jegodiensky’s paintings are abstract black and white “stain-pictures”, made from graphic sketches and photos the painter took while he explored the landscape.

Martin Speicher used these paintings as inspiration for his compositions, sometimes using structures of the painting, sometimes looking for a similar idea to translate into the notation. His compositions were written for the musicians involved in this project.

This is a re-release from Hybrid Music Productions HMP 17. Reviews

Dan Warburton
The sounding result, as one might expect, straddles the rickety old fence between contemporary classical and free improvised music: Speicher’s (excellent) clarinet playing recalls Boulez’s “Domaines” one minute, Peter Brötzmann the next. Guitarist Tammen is exemplary throughout, Vorfeld’s percussion touches are consistently deft, and Georg Wolf’s rich arco tone recalls Joélle Léandre’s Scelsi recordings at their best. This album grabs the attention and holds it vice-like for the full duration – and that’s rare these days. (1999)

Martin Speicher, whose “Erdtöne – Notation des Lots” on Hybrid must be one of the most criminally neglected masterpieces of recent times… (Dan Warburton in a review of Ursel Schlicht´s new CD “Implicate Order”, 2002)

Frank Rubolino, Cadence Magazine 1998
Fortunately, the language of Jazz is universal, since the extensive liner notes accompanying Speicher´s opus are totally in German. He is a multi-reed player who has composed an extended work for his quartet. It is typified by the intricate interspersing of the instruments of the instruments into a collage of sounds ranging from the very stark and barren to near cacophony. The composition relies on silence as much as sound. Broken down into 17 rather short movements, the piece flows seemlessly from quiet clarinet sputtering with bass, guitar, or drum interjections, to total group ensemble play that is freely improvised and energetically presented.

The individual movements use varying instrumental combinations from duet to quartet to achieve wide degrees of mood swings. A soprano/percussion duet gets quasi furious after a tentative start, while a duet for bass and guitar is dense and ominous. Their version of call and response finds Speicher emitting guttural, tongued reed calls to be answered jointly by Vorfeld and Wolf with equally unstructured atonal responses. The quartet segments start quitly and built to a semi-ferociousness before reverting to more soothing levels.

The interludes are used as platforms for soloists. On the first one, Speicher plays clarinet. He begins with breathly overblowing and continues to build steam with flowing, high pitched outcries alleviated by quiet passages. The second interlude features a percussion solo by Vorfeld who takes a very unconventional approach using triangles, gongs, and bowed cymbals to project an eerie trance-like state of mind. Wolf´s bass solo is a total arco performance that perpetuates the heavy atmosphere that that many of the movements have. The last interlude finds guitarist Tammen beginning in a restrained manner and maintaining the calmness with occasionall exclamatory outbursts.

The two codas wind the performance down with very restrained and quiet passages for trio and quartet. This music is as serious as it is intriguing. Speicher has taken a concept and built it into a suite that forebodes gloom and doom and just as quickly dispers that notion with fleeting rays of sunshine. The playing is quietly intense and it makes significant demands to the listener. Unstructured music winds down many diverse avenues, and this is just one of those passages that lead you to unsuspected places.

This production was made possible through support from Dipl.-Kfm. Werner Berndt GmbH, Kassel