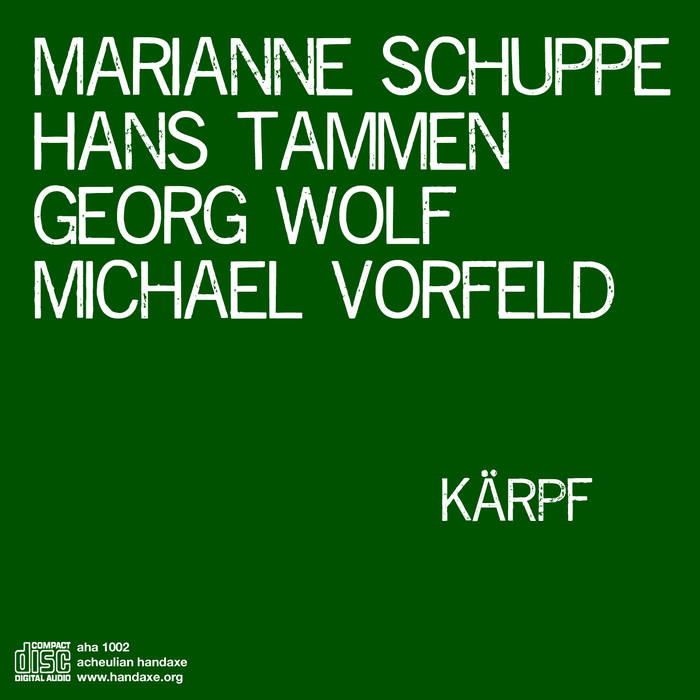 Members of this quartet have been playing together for over 20 years in various ensembles, e.g. at ENSEMBLE 2INCQ, an improvising tentet that has been performing numerous concerts between 1994 and 2002.

Marianne Schuppe is a singer, improviser, writer and teacher focusing on voice and flexibility between words and music. Besides her interpreting works of Giacinto Scelsi and Morton Feldman, she performs solo and in various ensembles, and has been involved in radioplays, life-performance and music-theatre. Her voice and performance style have inspired composers to write solo pieces for her incoporating inprovisation and conceptual work.

Hans Tammen is a composer/guitarist whose music has been described as a journey through the land of unending sonic operations, and his playing as reverse engineering of the guitar. Primarily he works with the "Endangered Guitar", a hybrid interactive guitar/software instrument for guitar-controlled live sound processing.

Georg Wolf has been working between mainstream & free, theatremusic, pedagogic work and radio broadcasts, but focuses since 1987 primarily on improvised music.

François Couture - Monsieur Délire
A judicious choice for a title: the Kärpf is a Swiss mountain, and this record is nothing short than a Continental Europe free improvisation summit between vocalist Marianne Schuppe, Hans Tammen on prepared guitar, bassist Georg Wolf and percussionist Michael Vorfeld. One long live piece (25 minutes), followed by five shorter ones, all recorded in 2000-2001. Was it worth releasing these tapes a decade after the fact? Yes, if only for the high level of interaction found here. The long track “Vrin” is especially stimulating.
Reviews:

Ed Pinsent - The Sound Projector
Splendid album and a fascinating inventive approach to four-piece acoustic group improv on Kärpf (AHA 1002) – one of three new items we got recently from Acheulian Handaxe. The four players don’t seem too hurried about rushing into one of those familiar improvising situations where all play at once and are determined to scrabble up the atmosphere with scrapey strings and where percussion is used largely as a battlefield preparation. Instead George Wolf (bass) and Michael Vorfeld (percussion and string instruments) use odd and isolated sounds, and quietly delineate unusual abstract spaces where every horizon is tilted sideways and each man must fare as best he can, balancing on stilts or springs as the occasion demands. In this zone, the “soloists” (and I use the word ironically) Hans Tammen contributes his “endangered guitar” and the vocalist Marianne Schuppe drops in urgent spoken mutterings, perhaps using the German tongue, as rapidly as any sewing machine can patch up your sports coat.

The effect of all this, particularly on the longer tracks, verges on the surreal – when you play this you get more than just an unusual combination of sounds, and the very atmosphere seems charged with genuine mystery, as though all four were facing a smoking gun to the west and a hangman’s noose to the east. This release is renewing my interest in the notion of “dynamic space” in performed music, and a greater sense of co-operation among musical players I doubt I shall meet again in the next 48 hours. Naturally one would love to know more about the precise configuration of that “endangered guitar”, but when a man is bringing home the musical bacon in such fine style as this, I deem it unwise to ask questions about the providence of such bounty.