The Funny Side of Discreet 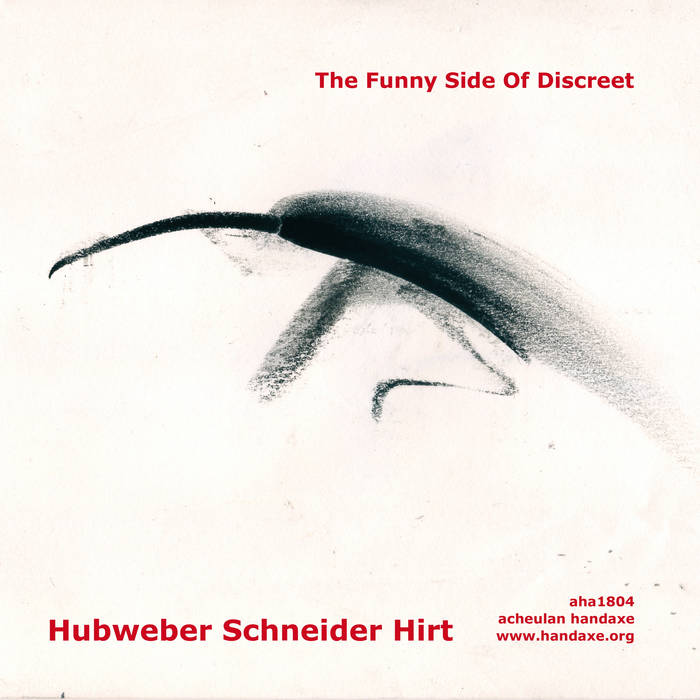 The title of a piece from the repertoire of the trio ISKRA 1903 (Rutherford/Bailey/Guy) says it all - “More Poetry, Please!” That trio fascinated us because of its tender poetry.

In “The Funny Side Of Discreet” we experience three individuals, relaxed, abated, exquisite enough to have nothing to prove. Yes, virtuoso soloists. However, along comes what Peter Niklas Wilson called the “Meta Instrument” - that’s what it’s all about! A collective that ignores trends of playing fast, high, far, loud. The younger generation may show much more virtuosity, but more often than not we don’t hear the story. It’s a natural process, as growth takes time.

As it’s music in the tradition of ISKRA 1903, we’re not surprised to hear that Hubweber, Hirt and Schneider were in touch with everyone - Bailey, Rutherford, Guy, Wachsmann, Casserley, and many more. “The Funny Side Of Discreet” - the discretion that smiles.

The Funny Side of Discreet is one of the titles included in the first solo album of trombonist Paul Rutherford published by Emanem in 1975. This album is a milestone of European radical improvised music, and according to Derek Bailey, the most original solo improv album among dozens of others, including his own.
Hubweber, Schneider and Hirt question the functionality of their instruments, search for new sounds, their congruences and all sorts of interactivities. Erhard Hirt manipulates a dobro and an E-guitar (guitar with e-bow?), Hans Schneider completely assumes the acoustic dimension of his double bass and Paul Hubweber contorsionne, dilates or contracts the air column of his trombone to the using mutes and his voice, hissing in the mouth. Hubweber's deep talent is that he is the only trombonist who recreates Paul Rutherford's own sonorities without imitating him for a moment, creating his own personal music with nuanced play in the extremes of the instrument. A disenchanted lyricism defying the laws of harmony and gravitation. He excels so much in this field that he shares the scene for two decades with Paul Lovens and John Edwards in the PaPaJo trio, which means everything. The guitarist Erhard Hirt is a researcher head of the electronic guitar and his claws acoustic dobro carry the sound slags farthest from the normal game of the guitar. We think of John Russell. Double bass player Hans Schneider, who often worked with Georg Gräwe, Paul Lytton, Wolfgang Fuchs, Stefan Keune and Joachim Zoepf, thrilled the soul of the big violin under the frenzied friction and rattling of his volatile bow.

But the most surprising comes from the atypical interaction and the gift of about their actions / reactions in the moment. Music essentially playful, imaginative, improbable logic, immoderate taste of turbulent changes and permanent instability. There is a common passion for finding complex, contrasting, simple or haphazard sound aggregates without redundancy or weariness. We always discover something new and not played yet that entails listening and attention. A remarkable album of formidable efficiency. The more I listen to it, the more I am conquered. Funny isn’t it?